Recent developments, independent of the OZ announcements, set Michigan City apart from the region when it comes to forecasting future development success. Consider the following:

South Shore Line Double Tracking –when the Federal Transit Administration signed-off on the Environmental Analysis (November 2018) for the improvements of the South Shore Commuter rail line between Chicago and Michigan City, the project cleared a huge hurdle in its final permitting stages. This project will reduce the commute times from Michigan City to Chicago from one hour forty minutes to about an hour, similar to those commutes for popular Chicago suburbs such as of Aurora, Naperville and Plainfield.  For More Information: South Shore Line Double Track

UDG believes that the cumulative impact of the activities above, along with fact that Indiana is already experiencing a boost in residents migrating from Chicago and around the Midwest, Indiana’s lower cost of living and lower property taxes, that Michigan City’s future development opportunities and growth will be set apart from the region.

For More Information Regarding Michigan City:

Michigan City - This is Gratitude

On December 22, 2017, Congress adopted legislation including Qualified Opportunity Zones ("OZ's) as part of the Tax Cuts and Jobs Act, which provides for deferral of long-term capital gains tax and, in some cases, a significant step up in basis and elimination of long-term capital gains. This provision is projected to save investors $1.6 billion in capital gains taxes over the next 10 years — to say nothing of the exceptional returns that investors can make on well-advised investments. The OZ program offers investors three unique tax incentives for investing in projects located in OZ's. Generally speaking, these are:

1. Deferral of Capital Gains – The initial income taxes due on proceeds from current capital gains re-invested in OZ's can be deferred as long as until December 31, 2026.

2. Reduction of Capital Gains – after holding an investment in an OZ for seven years, the deferred capital gains taxes due is reduced by 15%.

3. No Capital Gains on OZ profits – after holding an investment in an OZ for 10 years, an investor’s disposition of an OZ investment does not result in any additional federal income capital gains taxes.

UDG believes that Michigan City, part of the larger Chicagoland MSA at the eastern edge of rapidly growing Northwest Indiana submarket, is poised for phenomenal near term growth. UDG began making individual investments in Michigan City in 2015, and while steering those initial investments to incredible success, has developed an even keener understanding of the micro and macro economics of the local market place.

Included in our initial Michigan City focus, we have multiple complimentary and strategic OZ projects requiring approximately $50,000,000 of investment. 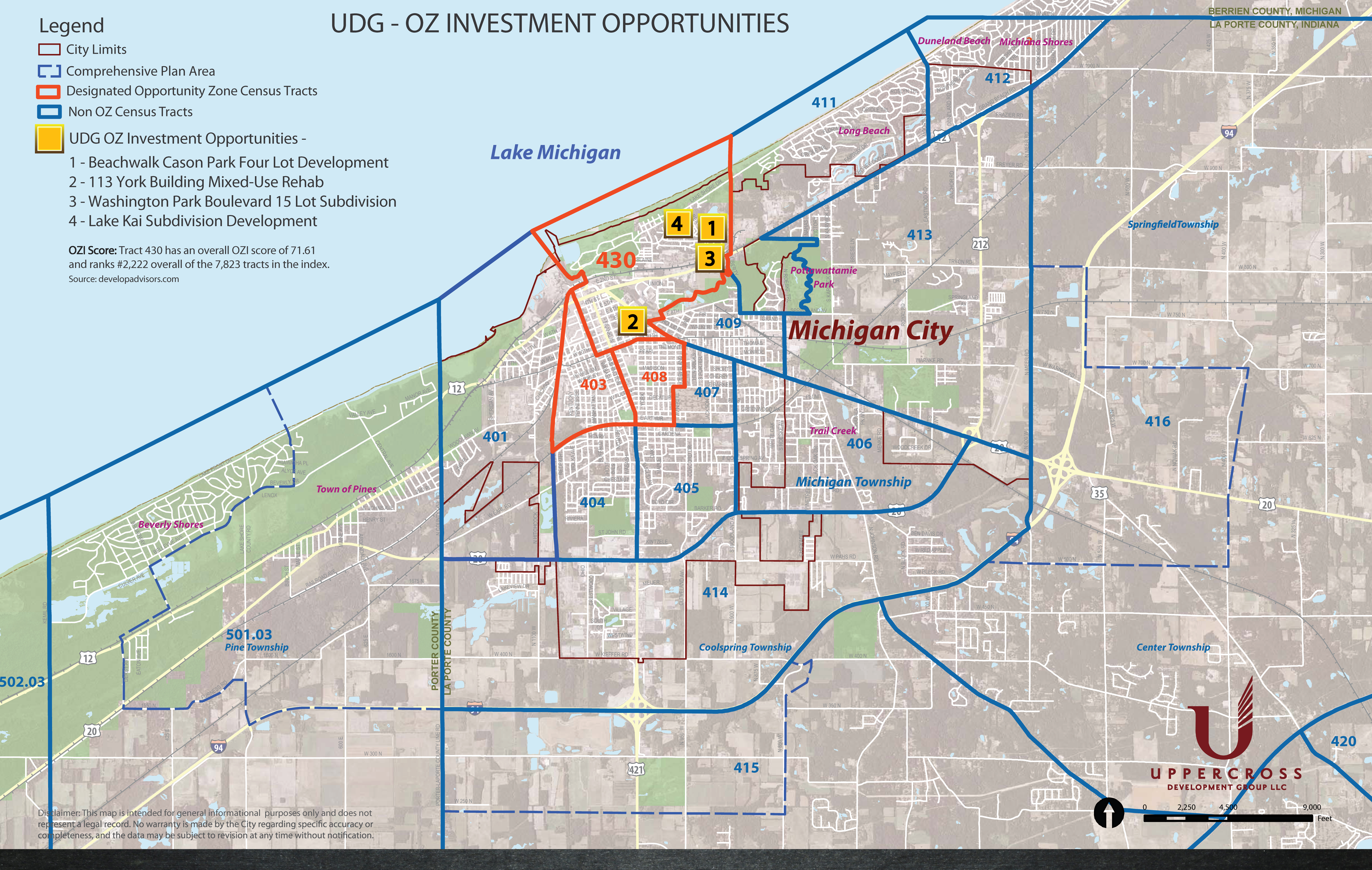